A recent study has shown that, unusually, both the sensory and motor capabilities of an electric fish are omnidirectional. This matching of motor and sensory spaces helps the fish to hunt prey efciently —particularly important given their energetically costly active sensory system. 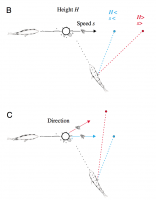 Archer fish can shoot down insect prey with a sharp jet of water. Fish usually fire from positions that are not directly below their target so that a dislodged insect falls ballistically with a horizontal velocity component. Only 100·ms after the insect is on its path both the shooter and other school members can initiate a rapid turn and then head straight in the direction of the later point of impact of their falling prey. The quick turn and subsequent take- off are performed ‘open-loop’, based on the initial values of the falling insect’s motion. We report here that archer fish can not only take off in the direction of the later point of impact but also predict its distance. Distance information allows the fish to adjust their take-off speed so that they would arrive within a narrow time slot slightly (about 50·ms) after their prey’s impact, despite large differences in the size of the aligning turn and in the distance to be covered. Selecting a constant speed program with matched speed and catching the insect on the move minimizes frictional losses. The initial speed of starting fish is slightly but systematically too slow and is increased later so that the fish arrive 20·ms earlier than expected and often make the catch on a higher than take-off speed. The variability of later speed changes suggests a systematic ‘error’ in the take-off, as if the fish underestimated distance. However, this apparent deficiency seems well adapted to the fish catching their prey at a high speed: if later the fish had no possibility to correct an initial error then it is better to start slightly too slow in order to minimize the risk of overshooting the point of catch.

Studying for the first time the forces transferred to prey, we discovered that archerfish do not fire all-or-none shots but fine-tune their surprisingly costly shots to prey size. This tuning is strikingly lacking of plasticity and innately matched to a constant key property of archerfish feeding ecology: the universal scaling of adhesive forces of their various prey organisms.

In extremely rapid maneuvers, animals including man can launch ballistic motor patterns that cannot immediately be corrected [1–3]. Such patterns are difficult to direct at targets that move in three-dimensional space [2–4], and it is presently unknown how animals learn to acquire the precision required. Archer fish live in groups and are renowned for their ballistic hunting technique in which they knock down stationary aerial insect prey with a precisely aimed shot of water [5– 7]. Here we report that these fish can learn to release their shots so as to hit prey that moves rapidly at great height, a remarkable accomplishment in which the shooter must take both the target’s three-dimensional motion as well as that of its rising shot into account. To successfully perform in the three-dimensional task, training with horizontal motion suffices. Moreover, all archer fish of a group were able to learn the complex sensomotor skill from watching a performing group member, without having to practice. This instance of social learning in a fish is most remarkable as it could imply that observers can ‘‘change their viewpoint,’’ mapping the perceived shooting characteristics of a distant team member into angles and tar- get distances that they later must use to hit.

Integration of the electrosense with other senses: implications for communication

Why study hearing and vision in electric fish whose outstanding electromotor and electrosensory abilities enable them to exchange messages 'secretly' over a channel that is inaccessible to most other animals?

Many animals, including humans, can visually judge the absolute size of objects regardless of changes in viewing distance and thus despite the resulting dramatic differences in the size of the actual retinal images [1–5]. For animals that have to judge the size of aerial objects from underwater views, this can be a formidable problem; our calculations show that considerable and strongly viewpoint-dependent corrections are needed to compensate for the effects of light refraction. Archer fish face these optical difficulties because they have to shoot down aerial insects over a wide range of horizontal and vertical distances [6, 7]. We show here that these fish can learn to acquire size constancy with remarkable precision and are thus fully capable of taking complex viewpoint dependency into account. Moreover, we demonstrate that archer fish solve the problem not by interpolating within a set of stored views and distances but by learning the laws that connect apparent size with the fish’s relative position to the target. This enables the fish to readily judge the absolute sizes of objects from completely novel views.

Insects can estimate distance or time-to-contact of surrounding objects from locomotion-induced changes in their retinal position and/or size. Freely walking fruit flies (Drosophila melanogaster) use the received mixture of different distance cues to select the nearest objects for subsequent visits. Conventional methods of behavioral analysis fail to elucidate the underlying data extraction. Here we demonstrate first comprehensive solutions of this problem by substituting virtual for real objects; a tracker-controlled 360 deg panorama converts a fruit fly’s changing coordinates into object illusions that require the perception of specific cues to appear at preselected distances up to infinity. An application reveals the following: (1) en- route sampling of retinal-image changes accounts for distance discrimination within a surprising range of at least 8–80 body lengths (20–200 mm). Stereopsis and peering are not involved. (2) Distance from image translation in the expected direction (motion parallax) outweighs distance from image expansion, which accounts for impact-avoiding flight reactions to looming objects. (3) The ability to discriminate distances is robust to artificially delayed updating of image translation. Fruit flies appear to interrelate self-motion and its visual feedback within a surprisingly long time window of about 2 s.

Here, we explore a method to directly assess the relevance of the various currents for electrolocation. In this new method, the pattern of current flow during a gymnotid EOD is changed selectively at distinct phases of the EOD so that currents generated by known electrocyte groups are affected. 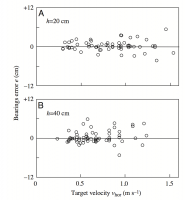 We report that the archer fish can predict the point where the dislodged prey will later hit the water surface and move in a straight line towards that point, thus enabling it to arrive as fast as possible. Only about 100 ms after prey is dislodged, the fish initiate a quick turn that aligns their body axis right towards where the prey will later land, and not to the actual position of the prey at that moment. 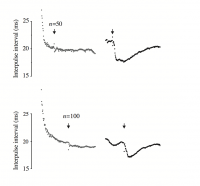 Gymnotiform weakly electric fish find their way in the dark using a continuously operating active sensory system. An electric organ generates a continuous train of discharges (electric organ discharges, EODs), and tuberous high-frequency electroreceptors monitor the pattern of transcutaneous current flow associated with each EOD. Here, I report that a prior interruption to the continuous train of EODs dramatically affects a response shown by many pulse-type gymnotids. (...) These findings show that continuous activity is required either to maintain sensitivity to high-frequency electrical stimuli or to ensure that such stimuli are able to modulate efficiently the pacemaker that sets the discharge frequency. 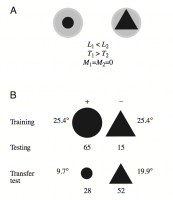 Several insects use template-matching systems to recognize objects or environmental landmarks by comparing actual and stored retinal images. Such systems are not viewpoint-invariant and are useful only when the locations in which the images have been stored and where they are later retrieved coincide. Here, we describe that a vertebrate, the weakly electric fish Gnathonemus petersii, appears to use template-matching to recognize visual patterns that it had previously viewed from a fixed vantage point. This fish is nocturnal and uses its electrical sense to find its way in the dark, yet it has functional vision that appears to be well adapted to dim light conditions. We were able to train three fish in a two- alternative forced-choice procedure to discriminate a rewarded from an unrewarded visual pattern. From its daytime shelter, each fish viewed two visual patterns placed at a set distance behind a transparent Plexiglas screen that closed the shelter. When the screen was lifted, the fish swam towards one of the patterns to receive a food reward or to be directed back into its shelter. Successful pattern discrimination was limited to low ambient light intensities of approximately 10lx and to pattern sizes subtending a visual angle greater than 3°. To analyze the characteristics used by the fish to discriminate the visual training patterns, we performed transfer tests in which the training patterns were replaced by other patterns. The results of all such transfer tests can best be explained by a template-matching mechanism in which the fish stores the view of the rewarded training pattern and chooses from two other patterns the one whose retinal appearance best matches the stored view.

Count and spark? The echo response of the weakly electric fish G. petersii to series of pulses

Weakly electric fish of the pulse type electrolocate objects in the dark by emitting discrete electric organ discharges (EODs) separated by intervals of silence. Two neighbouring pulse-type fish often reduce the risk of discharging simultaneously by means of an ‘echo response’: one fish will respond to a neighbour’s EOD with a discharge of its own following at a fixed short latency so that its EOD will occur long before the next EOD of its neighbour. Although working elegantly for two partners, this simple strategy should fail in larger groups because two fish could discharge in response to the same EOD of a third fish. Here, I show that the mormyrid fish Gnathonemus petersii could use a simple mechanism to reduce this problem. 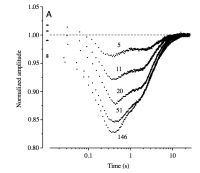 During their entire lives, weakly electric fish produce an uninterrupted train of discharges to electrolocate objects and to communicate. In an attempt to learn about activity- dependent processes that might be involved in this ability, the continuous train of discharges of intact Gymnotus carapo was experimentally interrupted to investigate how this pausing affects post-pause electric organ discharges. In particular, an analysis was conducted of how the amplitude and relative timing of the three major deflections of the complex discharge change over the course of the first 1000 post-pause discharges...

A computerized 360 ° panorama allowed us to suppress most of the locomotion-induced visual feedback of a freely walking fly without neutralizing its mechanosensory system (‘virtual open-loop’ conditions). This novel paradigm achieves control over the fly’s visual input by continuously evaluating its actual position and orientation.

The volume of air within the swim bladder and breathing cavities of the anabantoid fish Colisa lalia (Perciformes, Belontiidae) 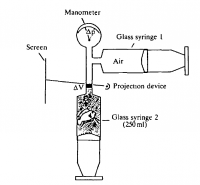 The swimbladder volume and air volume within the breathing chambers of the anabantoid fish Colisa lalia have been measured. These data help in the understanding of some of the functions of these organs and are necessary for an analysis of their role in hearing and sound production. By means of a simple trick (based on new data) it was possible to analyse the time course of air volume changes in the breathing chambers at different temperatures. The results are well described by a simple diffusion model. The temperature-dependence of the time course suggests an interesting increase of the diffusion constant with temperature.